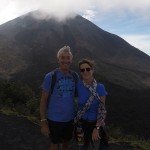 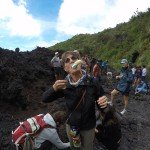 We’re now in Antigua, the original capital of Guatemala until earthquakes destroyed much of the city – so badly the centre of power was moved to Guatemala City. Antigua is surrounded by 3 volcanoes, so it seemed rude not to climb one! Since none of them are smoking at the moment we chose the closer and easier of the options and climbed Pacaya, it was still a steep climb of 2 hours at a fairly stiff pace. It was a fun hike with a lovely group of folk and the landscape resembled Switzerland in places it was so picturesque, but then turned into the valley of desolation as we viewed the most recent lava flow of 2014. At the edge of this lava flow are stones that emit a serious amount of heat and it was here that we cooked our marshmallows. Yummy late morning munchies provided you didn’t leave them cooking for too long!

Started sailing a bit late in life, started blogging even later!
View all posts by Claire →
← Tikal – Awesome
Room with a view! →