Ocean Rainbow has hosted a number of social occasions recently and the crew have been hosted as well so we thought we would put a few photos on the website as a record! 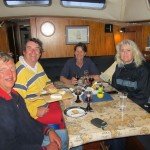 Thursday 27th June: Surprise visitors!   Ken Kincaid (Commodore of Portishead Cruising Club) and Paul (Skipper and Owner of Tickety Boo) had just arrived back from Plymouth and popped in to wish us well ...... and stayed for pudding, cheese and wine!   Katherine joined us a little later - she was chauffeur for the evening.  We told you Ocean Rainbow was a sociable boat! 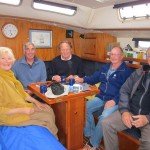 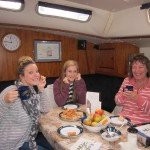 Sunday 23rd June :  Another surprise visit and this time from Carolyn and Alistair Roberts (S/Y Nademia) for a quick cup of tea.  Lovely to see them as they were en route home from a wedding.   Carolyn actually signed our copy of her book (which we have on board to make sure we don't miss any of the sights on our trip!)

A visit from the McGilvary clan for a quick coffee and danish pastry. 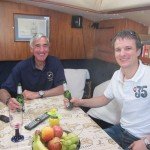 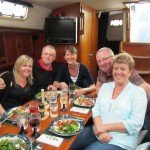 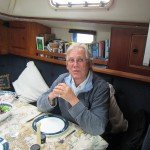 Saturday 22nd June : A surprise visit from Jonesy who joined us for a fairly extraordinary supper - but it was food!

Monday 17th June : The neighbours for supper!  It was really good to have Suzie and Baz, Jo and Kevin on board for a final meal before we depart.     Kenneth Mathieson came along at lunchtime to check out all the changes since his last visit to Ocean Rainbow. 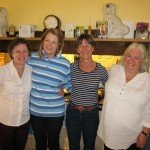 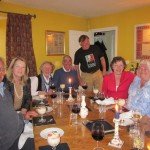 Our host and hostess - Adrian & Dorothy 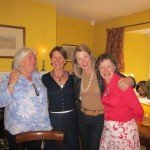 And the girls again

Saturday 15th June : We met up with the 'A' team at Ivy House for a great time with the Goldsacks.

Friday 14th June : We were in Bruton and Gilly had us over for a delicious supper. 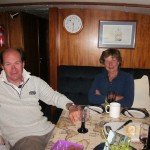 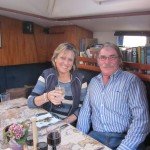 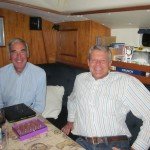 Thursday 13th June : Janis Sinton (TechTaste) and Jim came on board for supper.  Their first time on a yacht!

Wednesday 12th June : Andrew came for supper, primarily to switch cars and take the reliable Volvo in exchange for his Toyota!

Tuesday 11th June : Chris Stanham and James went on the same astral navigation course a few years ago.   Little did they ever think that they would be moored alongside each other in Portishead!    We managed to get  Chris on board for supper before he takes Nimble Ape down to the Hamble and her new owners.   He and Jules will take over their next yacht - Nimble Ape II - at the end of the month.

Monday 10th June : Inks and Hamish Macdonald came into Portishead Marina with 'Marjorie' on their way from Bristol back up to Sharpness and joined us for drinks (the tides were such that they had eaten supper en route).

Sunday 9th June : The week started  in Bruton with the Spellers coming over for a catch up over scrambled eggs and bacon.