About Us & The Crew 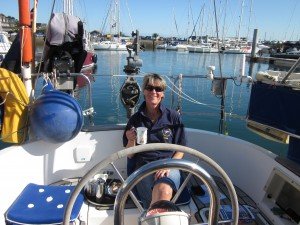 Claire:   Learnt to sail in Norway in 2003 and began to turn her childhood dream to sail around the world into reality.    Since then many miles have been covered under sail, further instruction taken, followed by girls’ trips to Spain and Greece as Skipper, but there’s a long way to go to ever match James’ skills!   However, adapting to a nomadic life on board shouldn’t be a problem having spent her whole life as a modern day gypsy! 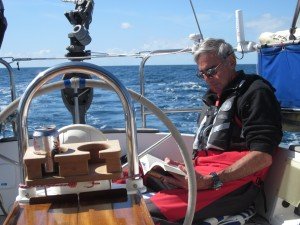 James:  Learnt to sail as a child in Cyprus and spent many years sailing dinghies and Army yachts before signing up to Claire’s dream and, whilst posted to Norway, bought Y Wawr, an Etap 21i yacht, instead of a new Volvo car.   Three years of sailing in the Norwegian Fjords and the completion of the 2005 Fastnet saw sailing very much “top of the agenda” for the future.  On returning to UK, James put the official seal on his qualifications and became a commercially endorsed Yachtmaster. Then followed the next step and acquisition of Heron – a Jeaneau Sun Odyssey 35.  After sailing the Bristol Channel for 2 years with Heron, including trips to the Scilly isles, the long dreamt about “blue water” boat was sought and we found Ocean Rainbow, a Warrior 40, in Brixham. 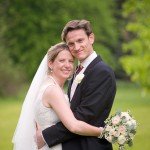 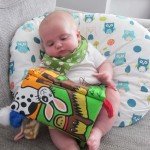 Edward, our eldest son, married Verity in April 2011.  They live in Teddington; Verity teaches maths at Hampton School and Edward commutes into the ‘big smoke’ by bike or tube – weather dependent!   They have a baby son called Rory. 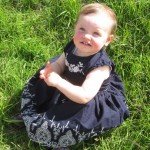 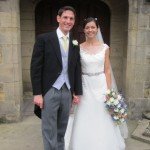 , No 2 son, married Claire (known as Lil’ Claire!) in August 2013 and they now live in Westbury on Trym;  Andrew teaches Geography at Bristol Grammar School and Claire is a physio at Southmead Hospital.  They have little girl, Emily.

This is us all gathered in Bushey Park, Summer 2016 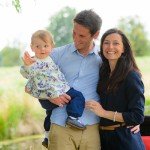 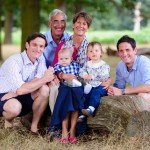 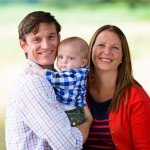 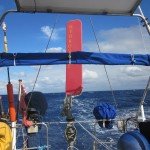 Humphrey:  Joined the crew of Ocean Rainbow in 2010 having spent a short period of time out of work and living in the Birmingham area in a garage.   In the last 3 years he has learnt to steer Ocean Rainbow with a soft touch and has a good working relationship with both Red Passion and Charlie.   He has never taken a day off sick and is totally reliable, he is an invaluable member of the team who comes with the added bonus of being very easy to feed and water. 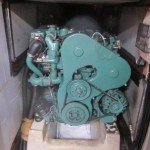 Victor:  Our most senior crew member having served on Ocean Rainbow for almost 20 years.  Victor is really delighted to be with us for this passage as his experience until now has been limited to the French canals and the route between UK and France.   As a result the 3500nm he has travelled so far is already a record for him.   He is easy to please and only too happy to help when the need arises.   With a fuel consumption of under 1.7 litres an hour he is also very economical.   His recent bout of pains in his joints seems to have been cured which is a relief as we would not have wished to set off without him. 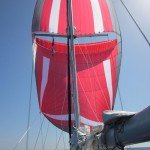 Red Passion:  As flamboyant as the name suggests!      She only joined the crew of Ocean Rainbow in June of this year but has really pulled her weight and shown that she was worth the exorbitant commission paid.   Although, by her own admission, she is slightly high maintenance she feels this is totally justifiable considering her performance to date!  The rest of the crew were not so sure so she has resolved to try harder to stay out of trouble when at work. 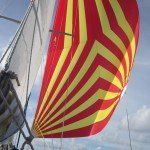 Charlie:   How could he not come on the trip?  Anyone who wears 9/12L red and yellow with such style deserves a place on the team.   Although he realises that he may not have such a large role to play on a downwind passage he still managed to convince the Skipper that he deserved his place as a member of the crew.   He has been with Ocean Rainbow for almost 2½ years now and has settled into a good working relationship with Red Passion and ably takes her place when the winds and seas mean that Red Passion can no longer cope. 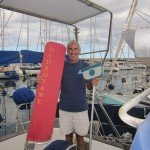 Henrietta:  Henrietta comes from Wales and, prior to joining Ocean Rainbow a couple of years ago, was resident in John Lewis, Cardiff.    She is an industrious, quiet and meticulous member of the crew.   We have no idea how we ever managed without her.  Now that all the original fitted carpets have been removed from Ocean Rainbow and she has wooden floors and rugs instead Henrietta’s workload is somewhat reduced but she is still just as diligent and always turns up for work with a smile on her face. 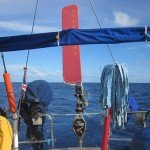 Violetta:   Violetta is the newest recruit having only joined the ship just before departure day at the end of June.   It seems hard to believe that she hasn’t always been a member of the team as she has fitted into her role so quickly.    Her chief responsibility was to keep the bilges up to standard but she quickly found that she could also help keep the decks clean and now her adaptability and flexibility has earned her a permanent place on the crew.   Sadly in 2016 we had to retire Violetta but she continues to sail with us and now gives excellent instruction to Molly Mop whose picture will be added soon (she wouldn’t pose today as she needs a haircut). 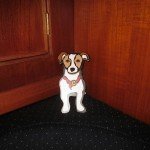 Lallydog MkII:  Lallydog arrived from America last year (a gift from Andrew and Lil’ Claire) to take her place on Ocean Rainbow.   Her namesake – Lally – sadly didn’t enjoy sailing on big boats and opted to leave the boat almost 3 years ago and take early retirement in Suffolk where she spent her remaining days in idyllic surroundings with Claire’s brother and his family.   Lallydog is great and keeps the crew entertained when in harbour.  On passage she rugs up in the bunk room and just waits quietly for the next port of call.  An ideal ship’s dog. 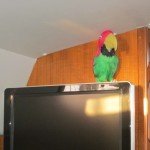 Potty Pol:  Well, what can we say about Pol the Parrot?!   She is incorrigible.  Claire found her in a pub on the shoulder of a wily old pirate the night of her leaving ‘do’ from work and the next thing Claire knew Pol was on her shoulder, wouldn’t leave and the rest, as they say, is history.   Pol’s vocabulary is fairly basic in more ways than one!   She does mind her manners though when there are children around and she also stays quiet during the night watches – for which the crew are very grateful. 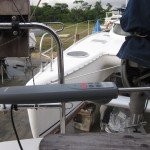 Tilley: Tilley has only recently joined the crew to ease the load on our Autopilot who has remained nameless for our adventure as we so rarely use him!   However Tilley requires far less power, is really quiet and is proving to be an invaluable member of our crew.