Major Players in OR’s Round The World (RTW) Preparations

A number of people have helped us to prepare Ocean Rainbow for her Round the World travels and we thought we should give them a bit of space on the website! 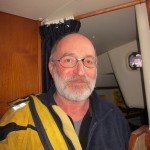 Ray Williams has been a fount of wisdom and knowledge since our arrival in Portishead and has helped with all our engineering problems (and there were a fair few on our last yacht!).   He came with us in search of our RTW ocean-going yacht and we value his advice and the professional service he has always given us.   We will sorely miss him on our travels – but he assures us he is only a phone call away!  Ray Williams Marine Engineer

John Raymond-Barker, who operates out of Underfall Yard and has recently built and launched the pilot cutter Edith Gray, was responsible for retro-fitting the teak and holly floor as well as the forepeak cupboards.    For a photo of John RB in action see  John R-B at Wildsailing

As an ex-kitchen fitter, Rich Shedden – who works with Ray – has been instrumental in ensuring that Claire’s dream galley, shelving and ‘hanging wardrobe’ have been fitted to her liking!

Kevin Kingston, also known as Stainless Steel Kevin!,  operates out of Bristol and  made the solar panel gantry and the swim platform.

Chris Reid has helped with the electrics in the boat and double checked James’ handiwork! 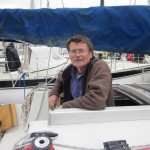 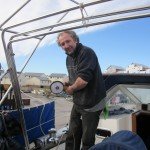 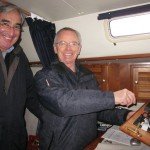 Richard Hannaford of R & J Sail, Clevedon has not just repaired sail covers and fender mats for us but he has also passed on his knowledge to Claire  – although not sure the end result will be quite so professional Claire will be setting off with a bag full of tools and materials that should make repairs a doddle!  Below are a couple of photos of Dick at work Richard at work 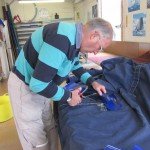 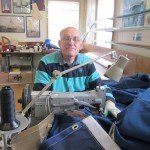 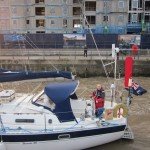 And our list would not be complete without the mention of Jon Lister (who has already set off on his travels but prior to his departure provided an extra pair of hands and an engineering brain) and Adrian Goldsack whose woodworking skills have created a companionway seat and plugged a few holes! 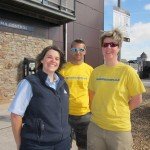 Jo Line  of  The Boat Repair Centre  has also been a massive help in restoring the few dents and bangs that OR has suffered over the years – and a few that have been more recent!  We can highly recommend her skills and here she is with Tom, her work colleague.  Do check out her website, if only to find out what her strapline is!   Also included in the photo is Steph (Mogg) from Quay Marinas.  Steph has been with us all the way, from the first phone call 9 years ago to book a place for Ywawr on our return from Norway with the promise of a larger boat in due course, to the welcoming of Ocean Rainbow and the realisation that we really did mean to try and sail around the world.

And here is the final photo call – taken at the Blessings and Christening party! 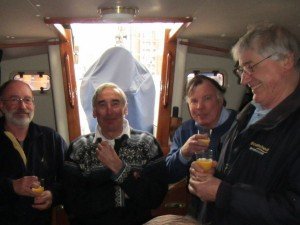 It was really remiss of us to leave out our IT whizz as one of our ‘major  players’ from the start of our preparations.   Martin Vines has come to our rescue on numerous occasions when we have had IT issues and it hasn’t mattered where we have been.  Martin first helped us when we lived in a house in Portishead but since then he has advised us when we have been in Spain, Portugal and the Caribbean.  If it hadn’t been for his remote access facility Claire would have had a scrambled computer for the last two months of the 2012/13 cruising season.  As it turned out, Martin fixed everything while Claire was in Marigot Bay, St Lucia and he was in Bristol.   How appropriate that the next consultation was when Martin was in South Africa and Claire in good old England!   The latest episode should see Claire’s computer ‘fit for purpose’ for the next season – at least that’s what we’re all hoping!!   If you’re looking for a reliable, knowledgeable and trustworthy IT whizz then look no further than Martin’s Helpdesk