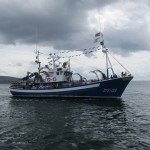 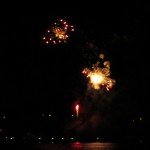 On the third day of Fiesta in Ares we were greeted with a 16 blast rocket salute at 10am!   Carlos, in charge of the fireworks and originally  from Bournemouth, spoke great english and explained the rocket blasts were tradition and the morning one had been let off late as it was Sunday!   There would be another at 2pm for the Festival of the Sea and a firework display at midnight.   The weather, although mixed, did not dampen the party spirit.   We toured the stalls, spoke to the band, returned to the boat for lunch, watched the parade of ships at 2pm and then in the afternoon we relaxed (see RTW page for additional comment) before enjoying the party in the evening - although, much to Claire's disappointment, James declined to go on any of the high-flying funfair rides for fear that it would ruin his delicious dinner!  At midnight we were back on the boat to be treated to a really magnificent firework display - and not just a bunch of rocket blasts.   It seemed to last for hours and we were in a prime position to see everything - smiley faces, hearts, multi-coloured showers ... you name it, we saw it!