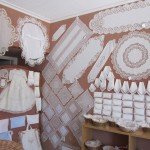 We had meant to stop in Muxia but a jammed genoa and strong winds meant we had overshot the entrance by the time we had all the sail under control so instead we went to Camarinas.    Amazing what you learn by mistake – Camarinas is famous for its lace and hosts the annual international lace festival!   There isn’t much else in Camarinas though and the harbour is rather congested with weed so not an ideal anchorage but the sun shone so a good stopover on our route north.