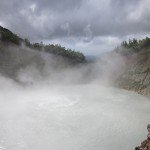 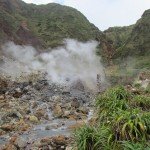 Once is enough!   Our visit to the Boiling Lake, the second largest one in the world, was a 7 hour round trip hike.  When we weren’t going up vertically, we were going down and when we weren’t going down we were going up …. It was unrelenting!    Thank goodness we set off at 0630 – any later and we would have had to endure a hot sun as well!    However the trip was really well worth the effort.   The Valley of Desolation was an amazing sight complete with boiling hot springs, mud pools and a very strong smell of sulphur.  The actual boiling lake itself was a magnificent spectacle but clearly not for swimming! So on the way back, we chose to have our second hot bath in a month in a stream fed by the hot water.  A totally amazing experience.   We have loaded a few more photos on the March RTW page.