The Shreddies have arrived! 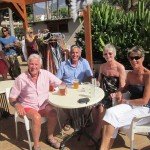 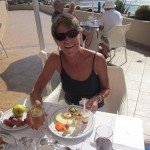 The success or failure of this adventure was hanging in the balance.   We were down to our last box of Shreddies and, despite hunting in all stores within bicycling range en route from La Coruna to Lanzarote, had been unable to locate even a small box.   The timely arrival of parents in Tenerife armed with boxes of Shreddies has ensured that Ocean Rainbow will venture beyond the Canaries to the Cape Verde islands!    What is more, they managed to persuade the Saga Rep at their hotel, Julie, to send her husband off to the nether regions of the island (to Iceland!) to purchase a further two boxes!   We should make it across the Atlantic now – many thanks Julie!   It’s been great to see the parentiligontes and they are on such fine form too – hope we enjoy life at their age as much as they do.

Started sailing a bit late in life, started blogging even later!
View all posts by Claire →
← Trip to Tenerife
Fact: Red wine and cold beer make the world go round! →