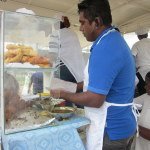 Doubles in the making 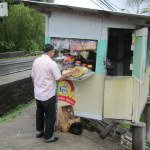 The Jesse James’ ‘Taste of Trinidad’ tour has the reputation of being the best way to see Trinidad and learn about the country as well as sample its many different types of cuisine.  This was an understatement.   Trinidadians are a blend of Indian, African and European with one common ingredient in their cooking – pepper!   During the tour, we sampled 92 different dishes/fruits/vegetables/drinks, including cow’s heel soup, duck feet cutters and mango chow; we drove from the west coast to the east, headed south down the Atlantic coast before turning inland after the Nariva swamp; then it was back across the middle of the country (where we ‘stole/scrumped’ coco pods, grapefruit, mangoes and oranges) before heading north for home.   We were ‘on tour’ for 12 hours and after 92 courses, we could barely move when the bus stopped, we were so full!   An amazing day and an amazing country.  (The July page has been updated if you have time to look at more photos.)