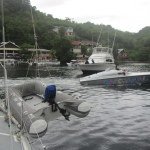 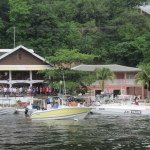 Poor Tommy suffered a real blow to his morale.  He assumed his duties as our trusty engine knowing that as a 3.5hp engine, he was infinitely superior to YamaHaHa’s 2.5hp, but this weekend he was made to feel very small indeed and was really pleased to be wearing his new hat!   For the last few days Ocean Rainbow has been anchored in a wonderful little bay on the island of Gaspar Grande but the peace and tranquillity was somewhat shattered as the friends and family of the few holiday homes surrounding the bay arrived for the weekend.  That’s when Tommy went into hiding!   Not one motorboat had less than 250hp on the back, some had as much as 600hp and two were powered by turbines!   We did think our night’s sleep might be ruined by one birthday party house that started its music  at midday, but lo and behold at 6pm everyone left and we were allowed to enjoy the rest of the evening listening to the birds settling down for the night and watching the fruit bats skimming the water as we sipped our rum punch!