Tyrrel Bay – as friendly as ever 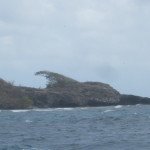 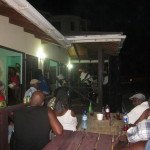 We left Ashton rather reluctantly (but time marches on) and set off across the acceleration zone between Union Island and Carriacou - we weren’t disappointed, the wind blew between 28 and 35 knots. So our passage to Petite Martinique was both lively and fast; we stopped off to collect water and, after a quick whizz around the tiny island, set off again for Tyrrel Bay and the warmest of welcomes from Trevor and Manny at Carriacou Marine.   We cleared in to Customs & Immigration (open till 1400 on a Saturday) then Celtic Spray came alongside in their dinghy and, by virtue of the Welsh flag we fly off our backstay, we were invited to join a group of folk for supper in a local café, which then developed into quite a night!   Not sure that the band - Reverlation (playing their first Gig at The Conch Shell) were quite expecting a bunch of yachties to invade and start jiving to the reggae beat, but that is what they got!   A really great fun evening in the Caribbean.