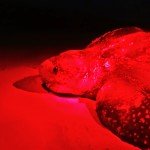 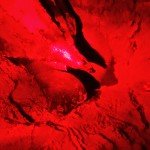 We spent a totally magical evening on Levera beach on the northeast coast of Grenada.    After a briefing from one of the guides we were taken to watch the 'turtle volunteers' release some hatchlings that had emerged earlier in the day (taken off the beach in the heat of the day and released at night to improve their chances of survival).   Then we waited until a leatherback turtle made her way out of the sea and chose her nesting site.   Once the female had established  the  best place for her nest we were taken in single file (to minimise the chance of anyone stepping on a newly emerged hatchling) to the nesting site.    On route we did indeed see hatchlings emerge from their nest and make their bid for freedom and the sea while we detoured around them.  The female we watched was a young one, as yet untagged, weighing about 600lbs.   The whole nesting procedure takes around 2 hours and leaves 'Mum' panting and exhausted after not only laying her 70 or so eggs but also making 'phantom nests' and camouflaging the real nest from predators.   She finally returns to the sea and some recuperation.  The females do not go through menopause, they lay every 2 or 3 years but in their fertile year they can lay up to 8 times!   An exhausting prospect - maybe the human way is better!