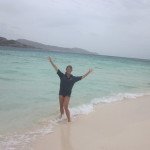 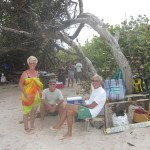 It’s official, Rhapsode are now Three Bay Friends – but sadly they are also on their way to Trini so we won’t be meeting again until next season.   Our final outing with them was to White Island, another great trip organised by Suzy on Spirited Lady.   We set off with Sherwin in his pirogue “Lambi Queen” loaded with the wherewithal for a BBQ on the beach.   We were supposed to catch our own fish (no chance!) but we did manage to find some conch which James then proceeded to cook and eat under local supervision.   The beach was beautiful with white, white sand in some parts and coral pink coarser sand in others.   We did snorkel but only on the leeward side of the island as the waters were too rough for the rather more spectacular windward reefs.    Another great day in the Caribbean.

Started sailing a bit late in life, started blogging even later!
View all posts by Claire →
← Birthday, Bogle and a Dinghy Drift
It’s worth being an early bird →