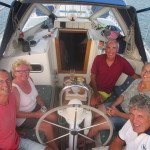 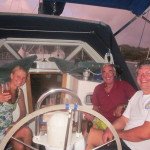 Annemarie & Steve on board Ocean Rainbow for supper

Well it had to happen at some stage but ne’er mind we are not phased!!   Last night’s supper was extra delicious with the addition of weevils in the rice – cost saving too as we could cut down on the mince content of the chilli. It’s perhaps a good job that Ishtar refused the offer of supper and only stayed for a sundowner! We also entertained a dutch couple, Gerard and Jos, from Mermaid (a Rival 38). Freebooter have been and moved on but so very good to have supper with them before they lay up for the hurricane season. We also visited the Molinere Sculpture park with them which was fab but not so fab on our return was the rather horrifying sight of Ocean Rainbow meandering through the anchorage on her own. Thanks to ‘Pussy Galore’ fending her off and releasing extra chain no damage was done to any boats and we are now very securely re-anchored in another part of the bay.   The Mighty Manson needs to look to his laurels, he is fast losing his reputation as one of the best all-round anchors!