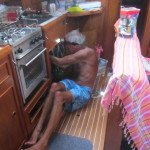 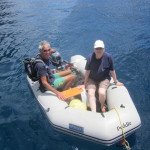 Well you know the saying "... but not a drop to drink.” Sadly not in our case, the water is drinking water leaking from a split pipe under the sink! We’d just moved across from Bat Cave in Soufriere to a mooring buoy under Petite Piton when the leak was noticed. Despite James’ best endeavours the pipe kept splitting so, having seen Gilly off to the airport for her flight back to UK, instead of setting off south we had to head back north! Although we had to motorsail for an hour we then had a great sail and romped along at 7knots making it back to Rodney Bay in time for a sundowner! Now all we have to do is find a solution to our leak – caused primarily because we have an imperial measurement pipe feeding onto a metric valve! It was a mission to fit in the beginning and it’s going to be a mission to fix! Ah well, the sun is shining and the water’s clear so not much else to worry about.