First bath since August and it was hot! 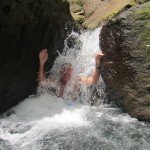 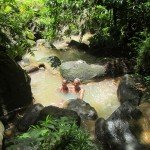 What an amazing island!  Photos just don't seem to do it justice.   Dominica is so green with lush vegetation stretching from skies to sea.  We had a very full day yesterday with 'rally driver' Steve at the wheel of our hire car - it's thanks to his skills that we managed to cover so much of the island and stay safe!  We had a grand tour of Dominica from the southern most tip of  Scott's Head to the wilds of the northern coastline with windswept trees that seem to be part of the cliff face itself.   We did stop off at Scott's Head for the magnificent view of  the Atlantic meeting the Caribbean Sea and then on to Trafalgar Falls where we clambered over rocks worn smooth by the pounding of the waterfall in full flood and were rewarded with an icy cold pool with its own 'shower' where we swam as hard as we could against the flow of water and went nowhere!    We then experienced the extraordinary hot pools!   Definitely as hot as our last bath in August .... although the water wasn't exactly crystal clear it was a great feeling.   This island deserves a long visit - we will be back.