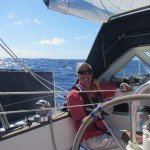 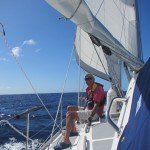 Two hours after leaving Agadir the wind arrived.  We had between 15 and 30 knot winds for the rest of the 220nm trip with Ocean Rainbow averaging 7 knots!   That is quite some speed for our lovely solid lady.   The sea was somewhat confused and it did feel like riding a bucking bronco (if it hadn’t been for the training we had received at Regimental parties I am sure the bruising would have been considerable!).    Humphrey had his work cut out, requiring a lot of encouragement and we were really grateful for the sprayhood as the occasional waves broke over us.  The shock of the night was the crash landing of our first flying fish!   They don’t half make a thud which is worrying in the pitch black when all you can think of is gear failure.   Suffice to say, no harm done and all was well (except for the poor old fish).

Started sailing a bit late in life, started blogging even later!
View all posts by Claire →
← 38 years on!
PWRCC Reunited after 2500nm →