Essaouira - now you see them 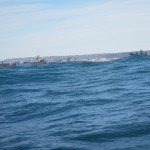 After a really slow sail down the Moroccan coast we finally made it to Essaouira at midday and found out what surfing the Atlantic waves was all about!    Hawai-5-0 eat your heart out …. Ocean Rainbow took to the waves and we were surfing in to the harbour at 10 knots!   As if that wasn’t bad enough we then had to do a hand brake turn to port in order to actually enter the harbour.   That having been accomplished we could only find space to stay by rafting alongside a large catamaran.   It didn’t take us long to decide that the swell which was causing the yacht to surge massively against the catamaran would end up causing damage to both boats.   What is more the swell was predicted to be worse on Thursday so we took to the sea again and headed for Agadir.   Such a shame as Essaouira looked like a great place to spend a day or two.