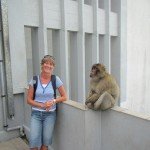 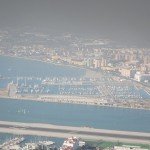 Fearing we might never have a better moment we made a dash up The Rock, despite some cloud cover.   We don’t do walking so we took the cable car up and were allowed to take our ‘handbag bikes’ with us.  The monkeys greeted us so Claire now has her photo!   The views to Africa were shrouded in mist but we did get good views of the Atlantic side.   The descent via the Royal Anglian Way was described as easy – not sure we should have taken the bikes though - and we were disappointed to have made the trip to St Michael’s Cave only to be told it would cost £10 each and was closing in 10 minutes!  However, we’re glad we’ve seen The Rock even if James had to have his eyes closed at various points of the trip.  There are more photos on the October page.