Our last Jessie May Charity Run for a while - 18th May

What a great day we all had enjoying the delights of the Avonmouth Riviera.      Andrew Ryan had gathered together some of his old friends from Bristol Uni OTC  to join him in a day's sailing.   They had come from all points of  the UK  so it was a real relief that the weather was kind, the sun shone, the wind blew and the crew were able to enjoy some fun and challenging sailing.  We managed to sail around Denny Island then off into the mouth of the Avon (avoiding ships moving between Portbury and Avonmouth and turning in King Road!)   up and under the bridge to Wales and a brief glimpse of St Pierre before returning to Portishead.   We had hoped to have lunch in St Pierre but it was neaps so not much water in the Pill so we  'ate on the run'!    The team had brought the most delicious lemon drizzle cake (thank you Katie)  for coffee break and then a seriously exotic picnic (thank you Nick and Dickie) for lunch with freshly baked bread (thanks to Claire's wonderfully efficient GN Espace cooker - Julian Kimberley please note the commercial plug!).    The whole trip was rounded off with a very successful man overboard drill to rescue a baseball cap.   The owner had said not to worry, but that did not deter the skipper who put the crew through their paces with man overboard drills under sail.   It took a couple of passes to rescue the hat but the hat was rescued!   Have a look at the pictures that say it all

Bank Holiday Sailing - which lasted a week (2nd - 9th May)

We made it!  We managed to stow all our kit, stock the fridge and departed for our Bank Holiday jaunt an hour earlier than expected!   Still minus a life raft though as Ocean Safety have yet to finish our service!    Undeterred, we have Drip Drop (our kayak) at hand for unexpected eventualities!   A great form of transport in sunny and benign conditions - a bit of a challenge when the wind gets up though! 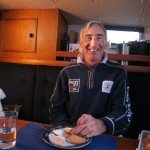 Our first night we popped into Cardiff and had supper on board before going ashore to have a few beers with the folk at Cardiff Yacht Club.  Always a good start to a holiday.  Friday we set off at midday and headed for Oxwich Bay - needless to say we had to tack down channel in some very blustery conditions finally arriving in Oxwich at 9.30pm. 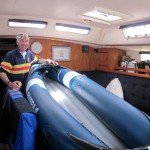 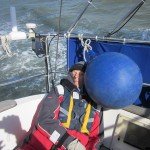 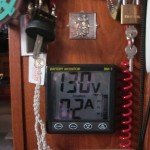 We deployed our Manson anchor for the first time which kept us secure in rather rolly conditions.   On Saturday we set up an anti-roll system with a weight hanging off the boom - it seemed to work.  At least it gave us enough stability to commission the watermaker which was a great success, turning sea water into very potable drinking water.   We then pickled it ready for a return to the murky waters of Portishead!   The solar panel worked extremely well as the photo demonstrates - a real relief to know that we will be able to keep our batteries charged without having to resort to the engine.

Saturday afternoon Drip Drop went on her first outing.  We set off to the beach to purchase the obligatory first ice cream of the season.   It was very nearly a disastrous return.   If you've seen 'Cool Runnings' you'll understand if I describe our launching for the return trip as a classic scene.  We have now modified our technique - James gets in first and gets organised with the paddles and Claire leaps in before the water gets over the top of her wellies!   Sunday we headed back up Channel and stopped off in Barry where we were invited to pick up Magic's  mooring line.     A very peaceful night and leisurely start on Monday for the return home.   That's when the Bank Holiday started to turn into an extended holiday.  On leaving the mooring we caught a rope around the prop .... despite James' numerous heroic attempts to free the prop by diving under the boat in the muddy waters of the harbour the rope was very firmly stuck. 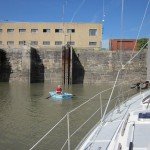 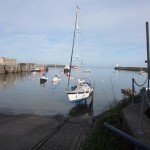 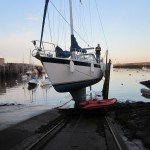 Nick Phillips from Merlin very kindly came to our rescue and organised for Ocean Rainbow to be taken up on Barry Yacht Club's trolley hoist.   Nick rowed us around to the trolley and all went smoothly.  The rope was removed very quickly and then we were ready to depart.   Unfortunately the trolley had other ideas as we found ourselves derailed half way down the ramp.   Suffice to say it took 3 tides to float us.   However, the time was not wasted as we did numerous little jobs on the boat.    Many thanks to all who helped us during our stay especially 'Auntie' Nest who lent Claire her car!   There are definitely advantages to being a 'Barry girl'!

April - The Month of 'The Transition'

40 moves in 50 years and still I wasn't prepared for this one!    Nothing like a 3 way move to challenge the sense of humour, the will to live and the husband's patience!    Actually it could be said that the husband was the reason patience was challenged!   We have had a serious problem reducing our memorabilia to reasonable proportions but that was nothing compared with the challenge we faced when required to jettison umpteen biros, bottle openers, key rings etc ..... suffice to say we have stored a huge amount of recyclable junk!   Not sure I should mention this but we also appear to have stored a serious amount of clothing but, since I may well be the most serious offender, we shall skip over this slightly contentious point!  Then we came to the challenge of setting up a pied-a-terre in a one bedroom flat in Bruton.  This flat must have come from the set of Dr Who - it has turned into a 'Tardis' and is now our home-from-home with rugs, pictures and enough bits 'n bobs to make us feel we have always belonged.  In fact, we were so settled last weekend we entertained our landlady to supper on our first evening (and so far, only evening!) in residence.  Now all that remains is the challenge of stowing all the 'boat stuff' and then we shall be free to set sail once again on the Cappuccino Channel.    Life has almost returned to normal, all is well with the world!