The beginning of another month and this time we are in search of a dehumidifier.    We are leaving Ocean Rainbow for 4 months during the rainy season and we have been advised that if we can find a dehumidifier it would be a good idea to buy one and run it each day while the boat is shut up.   Although we left OR in Grenada for 4 months two years ago and were really pleased to return and find that our vacuum packing of clothes and bay leaves with everything had prevented any mould or creepy crawlies, we have been told Guatemala can be very, very wet and humid so off we stomped down the one and only street that is Fronteras.     Actually we were successful, but we did walk miles in our quest and ended up catching a TucTuc back to ‘our’ end of town … a great little means of transport and, as with all forms of transport that we seem to use, the more people the driver can fit in, the better! 5 in our case!    We also bought some fresh vegetables, various other bits for the boat and then returned to Ocean Rainbow to weigh anchor and leave the bustle of Fronteras for the tranquillity of Lake Izabal. 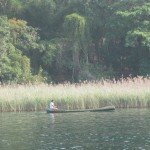 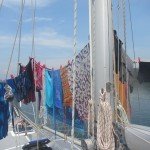 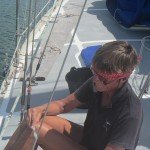 Toothbrush put to good use!

We sailed under the main bridge (the guide book said clearance of 80ft but it’s always  a bit scary as the wires always look as if they’re hanging much lower and will touch the top of the mast – they didn’t!) and on past a whole bunch of marinas, past Castillo san Felipe and out into a huge lake.    We’d no idea it was so large – you could be forgiven for thinking it was a short cut to the Pacific!   We didn’t have to sail too far down the lake before we found the ideal anchoring spot.   We dropped our hook and settled down for a wonderful 4 days. 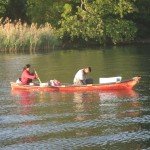 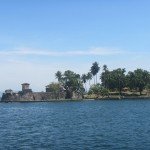 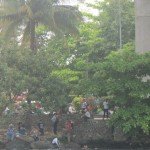 Sunday afternoon under the bridge

It would have been longer but the weather broke and a front came through with 35 knot winds that drove us into the shore and very shallow water.   Visibility was non-existent except in the flashes of lightening and from what we saw we thought we might end up tangled in the buoys and lines marking the swimming area for the castle, so we weighed anchor in howling wind, streaming rain and pitch dark…. retraced our track on GPS (what would we do without navionics …. it would have been really, really scary!) and headed back towards Fronteras and more sheltered waters.      With another front due to pass through on Sunday night we moved on again to anchor just off NanaJuana Marina where the holding is good and there is ample swinging room for us to have our 45m of chain, even though we’re only in 3m of water! 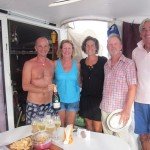 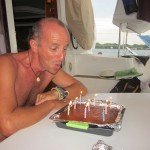 The front didn't come in on Sunday night, instead it was Monday and we were really lucky to time our arrival back on Ocean Rainbow just before the storm hit.  We had been celebrating Claudio's birthday ashore with pizza but luckily we were all ready to leave as the lightening and thunder started.   No sooner had we set foot on Ocean Rainbow than the rain started to fall.   It was another humdinger of a storm with tremendous winds, torrential rain, crashing thunder and brilliant flashes of lightening. Somehow it was rather more stressful than the night on the lake - we put this down to the fact that there were other boats near us giving us cause to worry not just about our anchoring, but theirs.    All was well but we were rather late to bed!   Subsequently Claire was talking to a local who said that the papers had described the event as a mini-Hurricane! 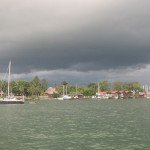 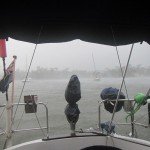 And then it rained! 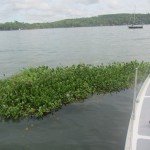 Debris after the storm

However, Rio Dulce itself is just a brilliant place.   The scenery is full of colour, the people are friendly and so willing to try and understand our increasing Spanish vocabulary, the fruit and veg are wonderful, the stall food is delicious and the shops are old fashioned and stuffed full of everything.  You just have to look hard enough! 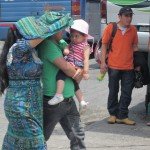 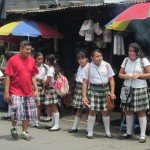 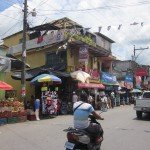 Our haul out was excellent with great care being taken of OR.   Edgar is in charge and oversaw the operation, Ricardo goes into the water with his mask to secure all the lines and check that nothing will be damaged when OR is lifted and there are two line handlers to ensure OR is kept straight.    It all took some time but we were delighted with the whole process.  We are now on the hard, right next door to Makani!   A good job we all get along!   In fact we are going to be travelling to the airport with Claudio and Janine so our adventure with them this season will not end until the very last possible moment. 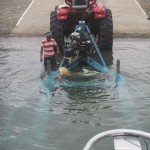 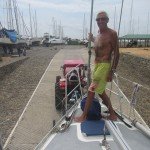 H&S eat your heart out!! 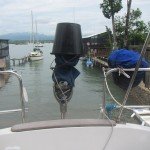 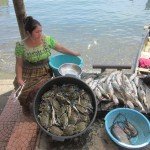 Blue crabs for sale in the fish market at Fronteras

Boat jobs dominate our lives.  We have cleaned the remaining stainless steel (aft of the doghouse including gantry and bimini frames) which we didn’t quite manage to finish while on Lake Izabal.   James has worked hard in the anchor locker, untwisting some chain and connecting all our chain together as we now need to have more than 50m readily available.   For some reason we had two lengths of chain and the plan had been to join the second length when needed ….. not sure we can remember the logic behind that decision but, suffice to say, we now have 100m in one length and we are happy.   (James aches from head to toe though from spending so long curled up in the locker trying to undo the bitter end shackle.  We’re now using electrical ties – they don’t rust! – and wondering why we ever used a shackle!!)   The chain is now all nicely flaked over an ‘A’-frame at ground level and the anchor lies alongside all shiny and ready for action.   All the canvas has been washed, dried and folded away so OR is now covered in motley bits of canvas to protect her while we are away.   Fenders are cleaned and put away, sails have been taken down and sent to ‘Tom’ for valeting and repairs.   Lines, sheets and wharps have all been washed, dried and stowed.   OR’s topsides have been polished and are sparkling clean and James has put on a protective layer of polish (a total pig to remove after 4 months but it protects the hull and worked well last time we hauled out), exposed windows have also been ‘coated’ with polish for protection, the keel and hull have been prepared for antifouling and the propeller has been cleaned to an almost ‘brand new’ sparkle. 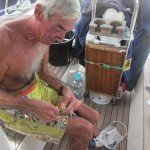 Wiring up the electrics for shore power 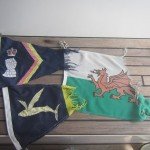 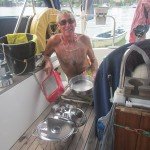 Inside the upholstery has all been cleaned and stowed so that air circulates between the cushions, all the lockers have been emptied, cleaned and restowed with fresh bay leaves – to ward off creepy-crawlies – all surfaces have been wiped down with vinegar (again to prevent mould) and the fridge has been allowed a holiday.   I’d like to say it was also sparkly clean but unfortunately the walls have become somewhat stained over the last few years and we can’t shift the marks so it’s clean but not sparkly!   All clothing has been laundered and stowed in vacuum pack bags,  the wet locker has been given a real ‘dig out', the galley has been stripped down and everything washed and restowed ….. if we get any mould we will be really disappointed.   However, as fast as we completed one chore (take batteries out of torches, clear rust off keys, grease all zips etc., etc) we seemed to add another two to the list but we did get there eventually.  It was dark and we were working by torchlight but we finally managed to ‘march out’ with everything as we want to find it on our return.   Thereby hangs the tale as we are having some work done on the engine while we are away so we have had to leave both port and starboard cabins empty to give the engineer all- angle access to the engine compartment.  Who knows what we will find on our return but we live in hope! 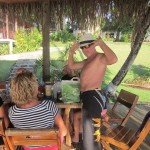 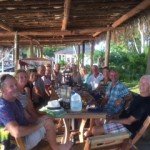 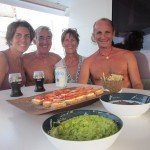 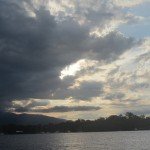 It hasn’t all been hard work though!  We went ashore to Sun Dog (owned by a Swiss guy called Pete) and had the best pizza ever (Tom’s Pizza) while celebrating Claudio’s birthday.  It was a lovely evening which had started with sundowners and appetisers on Makani.  Luckily we were back on board Ocean Rainbow before the Monday night storm hit!  Immaculate timing for once!   We have been sharing the ‘galley load’ by alternating between OR and Makani for suppers which has meant some lovely Italian dishes to mix in with the more normal offerings from OR’s galley.   Towards the end our creations were becoming very imaginative as we finished the perishable and ‘sell by June 2014!’ items in our store cupboards.  On Friday night we had a get together in the Palapa at NanaJuana Marina with the 6 other Suzie Too Rally boats that are at spending the hurricane season there – Makani, Horizons, Beyzano, Moody Mistress, Charly and Oystergo.   There are another 2 boats (Harmonie and Arkouda) in the yard but their crew have already left for ‘home’ and one is still to arrive (Milpat).   We had lovely eats and we finished with a bit of a ‘sing-song’ which was a great way to round off the Rally.   Our final supper with Makani was a joint affair – leftovers from both boats served Italian style on Makani.   We were rather noshed by mini mozzies (hurt like stink for an hour and then the sting and bite disappear) but it was a lovely night with lots of laughs.  We felt it was a real party as the monkeys were in close proximity and having a real shouting match which created the sense of a ‘good crowd’. 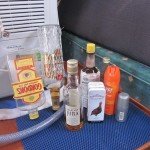 Definitely time to move on .. no drinks left! 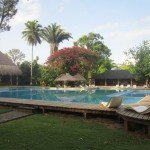 If only we'd had the time - NanaJuana swimming pool 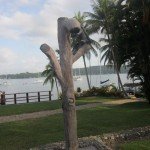 And the quirky monkey shower

Our final day on Ocean Rainbow was lunatic with last minute jobs and trying hard to ensure everything was tickety-boo but we were finally finished and joined Makani at the Hotel Reception area where we had a picnic supper together before catching our taxi to Guatemala City and the airport.   Our driver, Jorge, was excellent but the roads were atrocious and a little bit dangerous to say the least!   The recent rains and the rain that night had combined to create a road that was awash with water, stones and earth.  It strikes us that it is a good time to be leaving …. the rains are coming! 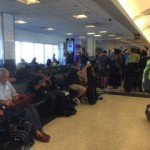 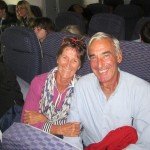 As a bit of a postcript, we arrived back in UK only 30 minutes later than anticipated but the trip was not without it's excitements!   We missed our flight from Houston to Heathrow and then spent the next 4 hours running between terminals to catch an alternative flight .....  we finally made it on a direct flight from Houston and arrived in England after our bags!  Now how did that happen?   No idea, but we are grateful!