Canals and Rivers of France - September 2018

Well September was a short month for Ocean Rainbow.   Having arrived in Port Napoleon on 29th August we didn’t actually manage to get a slot with the crane to re-step OR’s mast until Monday 3rd September so we had a few days to spare. 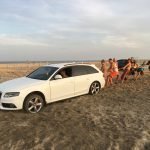 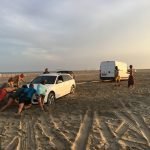 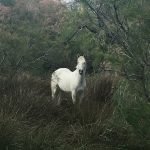 On the first day we went on a mercy mission with a bunch of young sailors from the next door boat to rescue a car that had managed to bog itself in the sands with an incoming tide.    The next day we decided to get some fresh air so set off  back to the beach on bikes.    It took decidedly longer on a bike than it did by van and then we made the outing even longer by walking along the sand dunes trying to get to the kite surfers who were out in force.   It was a lovely trip there across the marshes but really hard work coming home against the wind!  No flamingoes spotted but there were horses and swans. 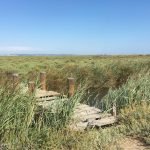 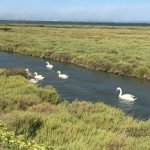 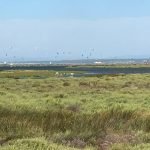 It wasn’t all relaxation though as we did have to do some preparation for re-stepping the mast.   Having located the mast and boom in the racks we removed all the wrapping and padding we had used to protect it for the road trip.   A filthy job as the dust that had collected over the summer was extraordinary.   Then Jean-Jacques lifted the mast and put it in a trolley to allow us to put the shrouds back together.  We then cleaned everything up ready for re-stepping. 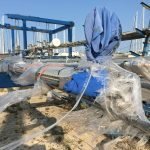 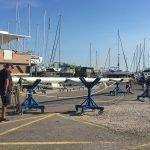 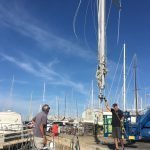 The yard operators at Port Napoleon are not just efficient they are extremely friendly and helpful.   It transpired that we had managed to switch the stays on the spreaders when we were setting the mast up and it wasn’t until we tried to attach the wire to the bottleneck screws that we discovered our mistake.    By this time the mast was firmly in position and the last thing we wanted to do was take it down again!   Well Jean-Jaques came to the rescue and managed to do everything from the cherrypicker.  Phew!!  The final thing to be fitted was the wind indicator at the top of the mast.   This required James’ help as Jean-Jacques (who normally does it as part of the re-stepping process) couldn’t line it up correctly so he went up in the cherrypicker too! 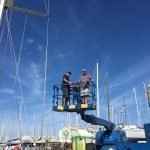 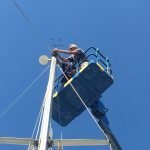 The whole process only took an hour and then it was back to our berth to finish the adjustments.   When we set out on our canal adventure we had thought we would sail for a month having arrived in the South of France but the work required to get OR ready to sail and then pack her back up again ready for the winter didn’t justify the time we’d be able to spend on the water so we ended the season in September and hauled out on September 4th.   We then packed everything away and once finished, we jumped on a bus and train and headed for Menton and a week with Jeanetta (James’ sister).   A lovely way to round off the season. 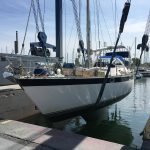 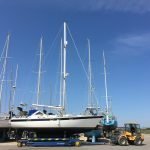 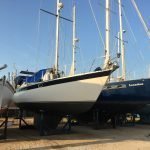 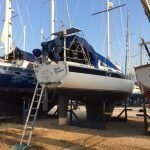 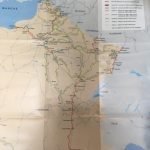 To anyone reading this diary, We can thoroughly recommend a trip through the canals of France and our only advice would be to take it slowly.   There is so much to see and do.

Thus ends our 2018 season.   We caught a flight from Nice (because we were staying in Menton) to Bristol on 11th September and returned to life on land.