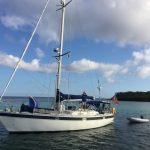 We met up with PR2 but we had no idea that another great sailing friend and fellow Warrior owner was anywhere near us ... in fact we thought he was on his way through the Panama Canal! But Jon, on Hecla of Uist, posted a blog and we found he was only 3nm from us. We weighed anchor at 4.30pm and motored (yes, we did ... we were in a hurry!) from Dakity to Almodovar. Jon is the reason we bought a Warrior. Jon was part of our planning process in Portishead. We sailed across the Atlantic with him. We began our travels in the Caribbean with him. We sailed in different directions for Hurricane season 2014 and we haven't seen him since. Can't tell you how wonderful it was to see him on the foredeck of Hecla .... he's not changed a scrap!