It's been a real slog 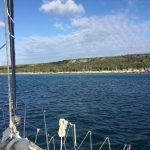 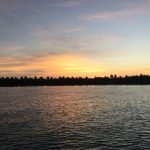 We've taken 12 days to sail/motor from Santiago de Cuba to Ponce, Puerto Rico with a two day stop at Isla Beata to shelter from the storm and a night at anchor off Isla Saona just to break the trip and have a swim! A total of 860nm of which 35 hours were spent motoring with no wind and a horrid swell which is never fun. One more little drama along the way - it would appear either our starter battery needs replacing or maybe the starter motor needs servicing (hopefully not replacing!!).   Approaching the anchorage at Isla Beata we tried to start the engine. Nothing. Not even a splutter. Luckily the shunt worked and we didn't have to anchor under sail but it was bit of blow to morale after the drama of the previous night!! This has not been the best of passages but we are not dispirited, we are now in the land of shops and chocolate and chips!