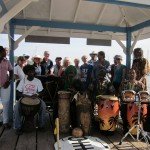 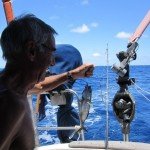 After a great send off from Chaguaramas, we made our way to the north-west corner of Trinidad (pausing for a last swim in the relatively blue waters of Scotland Bay).   Then it was trade test time again for Ocean Rainbow, who once more did us proud and rose to the challenge.   Against the equatorial current and heading into variable south easterlies she managed to keep us at 30˚ (or less) hard on the wind for the majority of the 365 nm trip.   In fact, it took us 4 days to reach the mouth of the Essequibo River making the trip the longest we have ever sailed upwind.   Although at times we were speeding along at 8 knots, the current meant that we were only covering the ground at 5 knots or less … a bit frustrating, but we sailed, and only had to use the engine to get us around the top end of Trinidad so we’re happy sailors!   And, guess what? …. James caught a tuna on Day 2 so we had tuna steaks for supper.   What more could you ask for?!