Uphill Into the Atlantic Again 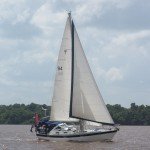 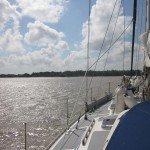 Well we’ve done it!  We’ve sailed 467nm from Guyana to French Guiana (254 nm in a straight-line) and are now anchored in the Maroni River off the village of Yalimopo in the Awali Yalimopo region.   The Atlantic Ocean was, at times, like being in a washing machine, at others it was just all-over bumpy …. but for the rest of the time it was plain sailing- albeit upwind again!  In saying plain sailing, we were once again hard on the wind battling against the equatorial current (~2 kts) in order to make headway south with the wind mainly from the south east.  Fortunately we did have a mid-afternoon lift each day which we made the most of, but we were still tacking every 2-3 hours trying to outwit Mother Nature!   Fat chance … but we are fit and well and very, very happy to be here amongst the Amerindian community.