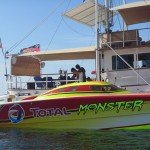 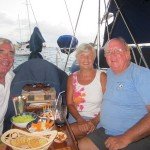 Well we’ve made it and jolly nearly all the way under sail.   The crow would have flown 56nm – provided he’d actually decided to go considering the squalls, thunder and lightening we experienced.   Ocean Rainbow actually sailed 84nm and we made best use of the wind that came with the rain and we got to Store Bay in 20 hours of uphill sailing against the prevailing current.   Not exactly a speed record but good enough for us.   However, speed records were what we were hoping to witness on Saturday at the end of what’s known here as the Great Race – it’s the annual power boat race from Trinidad to Tobago.   We dug out the ear defenders (not for the turbo engines of the racers but to protect our ear drums from the noise of the competing sound systems on the “mother boats”!!!) ….. but what a party.  We enjoyed the festivities from the comfort of Ocean Rainbow in the company of Bill and Judy from ‘Charbonneau’ who joined us for sundowners.

Started sailing a bit late in life, started blogging even later!
View all posts by Claire →
← Been on ‘Oliday!
Mr Piggy and Zorro →