It was a draw! 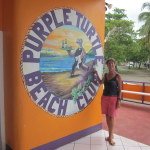 The girl from S Wale(s)

Thank you for all your submissions, we have had lots of chuckles over the responses.   For those who, like us, had never heard of a swale before – it is a depression in the ground that serves the purpose of reducing flooding.  Although the ground is supposed to be boggy in the area, there was no evidence of that where the sign was located but then we were in Nevis.   As for James, no, not ants in his pants nor any of the other hideous options we received but we do feel that John Littler’s “Caught Short, of course” deserves a donation to the MS Society as does Paul from ‘Tickety Boo’ with his “James was sure he had left S Wales behind long ago”!   Little does Paul realise that the girl from S Wales is still tagging along as crew!  Paul’s chosen charity is the RNLI.